The Language of Millennials

Has anyone ever noticed how millennials have developed their own version of English through online text, which they all understand? Millennials use grammar to encode meanings older people would be less familiar with. This then sparked a discussion on how it quickly became the ‘norm’ for how they communicate online with each other. Although some of the older generations might be familiar with some of the terminologies used such as ‘brb’ (be right back) or ‘lol’ (laugh out loud, sometimes mistaken for lots of love), there’s more to it than just the act of abbreviating a word or phrase.

To show an example of this adapted form of English, if I write a statement like “I am happy” when written like that it is a stand-alone statement states what it means. However, when something such as an exclamation mark is added it emphasises the feeling behind it. But, if it was to be written as “I am happy!!!!!!” the overuse of exclamation marks would evoke a different meaning of the emphasises of the expression behind what was originally stated. The same reasoning goes for expressing laughter through text, “Haha” could be written in different ways. For example, “hahaha” has different connotations than “ha” would.

Similarly, if it was to be written as “I aM HApPY” millennials would view the use of lower and upper case evokes more of a sarcastic meaning behind it. This way of expression stemmed from a SpongeBob meme. 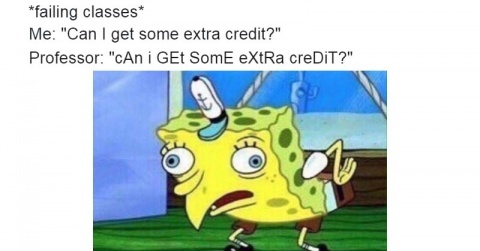 Another example could be the difference between saying hello over text like; “hELLO” “HELLO” “hello!1!” “hello!!” etc. As you can see they’ve been written in different ways using different expressions such as exclamation marks, numbers and a varying form of capitalised and non-capitalised letters. Using a combination of these elements in varying ways gives off different meanings and expressions of the one word. To those who aren’t familiar with this way of speaking through online text would think that this was gibberish (which in a way it is) but you can’t deny that the fact millennials have become native speakers of this new form of English and it has become common knowledge among them, which is quite fascinating. It could be seen that this has stemmed from the use of emojis that has become more common to use to emphasise a sentence you’re saying over text. For example, rather than saying “haha” or “lol” that could be replaced with a laughing face emoji.

The knowledge of this newly adapted version of the English language is commonly known and many have written published articles on it explaining to those who might not know as much about it as your average millennial would. In some cases, it can be taken out of context and even over-exaggerated. For example, in a Daily Mail article, they give a rundown of an alphabet of letters accompanied by the ‘millennial’ version of that particular word or phrase. Some of the examples of this ‘over-exaggerated’ interpretation of the language states phrases such as “Bible” is meant to mean “This is used by millennials to swear they are telling the truth, the whole truth and nothing but the truth e.g.: ‘Bible, that dress makes you look fat’.” Personally, I don’t think that this is a very popular phrase, but more so a phrase that was seen to be used by someone once and decided that it was a common phrase millennials used. More of these unusual abbreviations use terms such as GOAT – An acronym for ‘Greatest of All Time’ i.e. ‘Madonna might be good, but Beyoncé is GOAT.’ It is apparent that some of these abbreviations, commonly used or not, can be seen as quite silly or unusual when it’s shortened down, such as ‘GOAT’.

In addition to language development according to millennials, there also seems to be a change in colour from what’s commonly known as ‘baby pink’ to ‘millennial pink’. Some say it started in 2014 with Wes Anderson’s movie ‘The Grand Budapest Hotel’ while others are saying that the tipping point was the Rose Gold iPhone n 2015. It was also seen as a positive movement towards gender equality and fluidity. Bree Leech says; “Pink can appeal on so many levels – for its calming properties or its nod back to the retro-fantastic ‘80s, a theme we are seeing continue still.” As before this, pink was generally seen as a ‘girls’ colour to wear etc. But now is seen on boys a lot more frequently and it has become ‘on-trend’. I’ve seen this colour being used in advertisements and people wearing clothing with this colour, but I’d never known it to be called ‘millennial pink’, I just saw it as another popular colour that had was ‘on-trend’. Am I the only one who hasn’t noticed the decisions being made to class a common trend as ‘millennial’? A similar ‘trend’ that has been noticed is with food. Certain foods have become more popular such as Nando’s or Avocados. These trends have seemed to spike particularly on social media platforms such as Instagram and YouTube. This behaviour was especially prevalent on dating platforms millennials frequented who would share phrases such as “If you don’t like pizza, or Marmite, or Nando’s, we just won’t get on”.

What’s your thoughts on these millennial trends, have you encountered them? Are you someone who partakes in these trends?

While you are here, have a look at what our platform can do for you in our latest product overview

Let Us Know What You Thought about this Post.

Release Management in the Cloud